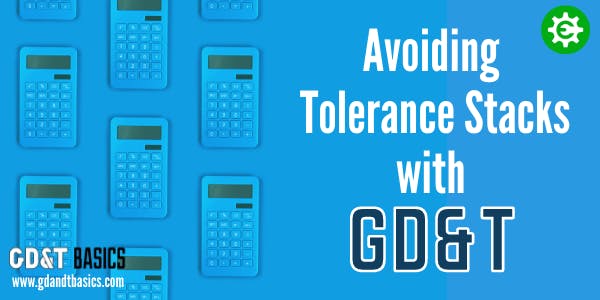 Tolerance stacks can be a nightmare

An example of tolerance stack-up on a part is illustrated in the coordinate dimensioned drawing shown in Figure 1.

Let’s say we want to locate the bolt hole (highlighted in blue in Figure 1). The location of this bolt hole is dependent on several items, outlined in red in Figure 1:

We are going to look at this same part, but now it is dimensioned using GD&T, as shown in Figure 2.

The feature control frame for the bolt holes also references Datum Features A, B, and C, which sets up the Datum Reference Frame for inspecting the part. (The datum reference frame is usually set up to mimic the way that part is assembled.) Datum Feature A is the back surface of the part, Datum Feature B is the bore, and Datum Feature C is the keyway. The datums created by the datum features referenced in the feature control frame are highlighted in yellow in Figure 2. During inspection, the part will be fully constrained to this datum reference frame. Because we are checking the part in respect to the way it will be assembled, this ensures that only a functional part will pass inspection.

Using the appropriate datum features to set up your locational tolerances also helps reduce the number of tolerance calculations that would be required for a full assembly of parts.

For a more in-depth look at this example of how tolerance stacks can be avoided using GD&T, check out the video below.