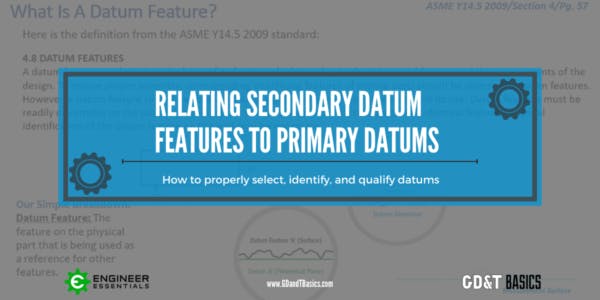 Properly defining, qualifying, and referencing datum features is essential to ensure that parts are properly manufactured and inspected.  To begin exploring proper use of datum features, it is helpful if we first review definitions and rules for selecting, identifying, and qualifying these features.

A Datum Feature is a feature on a physical part that is used to reference other features.  The ASME Y14.5 2009 Standard tells us, “A datum feature is selected on the basis of its functional relationship to the tolerance feature and the requirements of the design.  To ensure proper assembly, corresponding interfacing features of mating parts should be selected as datum features.  However, a datum feature should be accessible on the part and of sufficient size to permit its use.  Datum features must be readily discernible on the part.  Therefore, in the case of symmetrical parts or parts with identical features, physical identification of the datum feature on the part may be necessary. “

One common mistake when selecting datum features is to use an axis, centerline, or center plane.  According to the ASME standard, these items cannot be datum features.  This is because multiple features could share the same centerline, center plane, or axis, making it difficult to determine which feature should be prioritized as a datum feature for inspection or manufacturing purposes.

According to the 2009 ASME Y14.5 standard, datum features must be controlled (also known as datum qualification) by applying appropriate geometric tolerances, or through Rule #1 with size for features of size.  The 1994 version of the same standard is less strict and says only to consider applying tolerances to datum features.  Typical Geometric Dimensioning and Tolerancing constraints used to qualify primary datums are size, circularity, cylindricity, linearity, flatness, profile, or location.  Secondary and Tertiary datum features further define orientation and/or location, referencing back to higher precedence datums.  Typical constraints for Secondary and Tertiary datums can be divided into two different categories, depending on the manufacturing process.  For milled parts, perpendicularity, angularity, parallelism, location, and profile are common, while perpendicularity, runout, total runout, and profile are typical.  This is what we call Datum feature qualifying.

Check out the video overview of relating secondary datum features to primary datums below:

Want to Learn More About Datums and Other GD&T Concepts?

Our online courses can help you learn and understand all GD&T concepts!