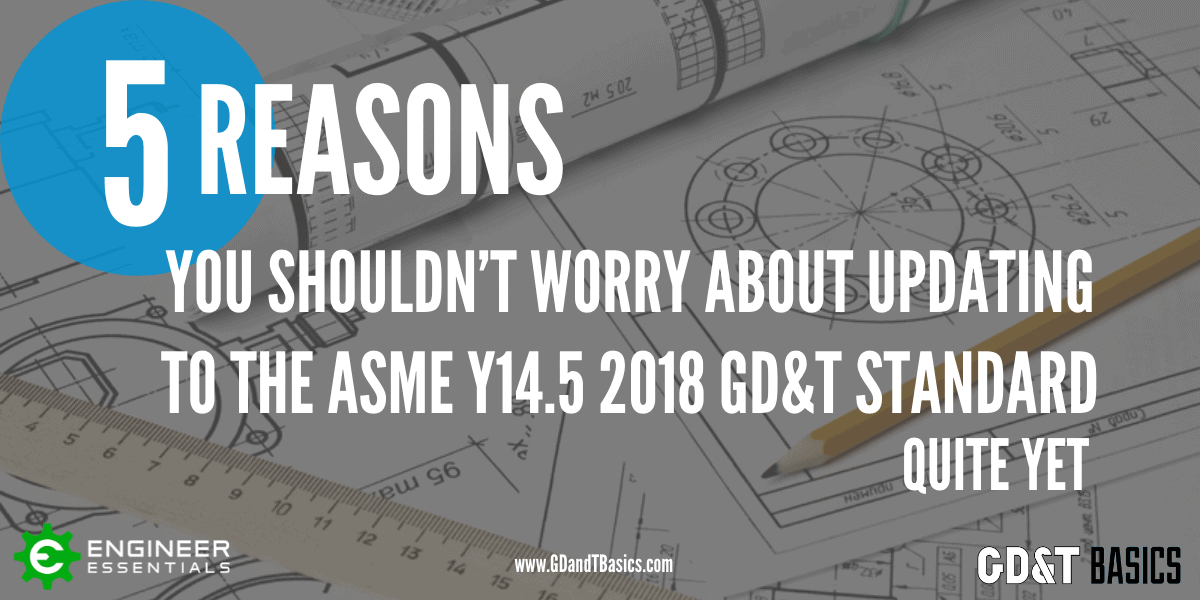 5 Reasons You Shouldn’t Worry About Updating to the ASME Y14.5 2018 GD&T Standard Quite Yet

The ASME Y14.5 2018 Geometric Dimensioning and Tolerancing standard is relatively hot off the presses, and it is great to see a new update to one of the most widely used documents in the mechanical engineering industry. For those of you not aware, the previous 2009 standard was a significant overhaul to the 1994 standard and clarified a bunch of points that were left open to interpretation. So now that the 2009 standard has been surpassed, does that mean you should stress out about updating right away? Well, you can probably wait a while to change the numbers “2009” to “2018” on your title block as here are five reasons to continue using the 2009 standard for the time being.

For a detailed comparison between the standards, be sure to check out our article on the differences between the ASME Y14.5 2009 and ASMEY14.5 2018 GD&T Standards.

Quick note: I love the changes in the new 2018 standard, and in no way am I advocating that the standard should not have been updated. However, here at GD&T Basics, we are not evangelists of the GD&T Standard – we are realists. We want everyone to achieve the best, real results while working with their drawings. We advocate using the GD&T system as a means of improving design, machining, or inspection results – but blindly adhering to a continuously evolving standard should never be the end goal.

1. The 2018 ASME Y14.5 removed symbols that you probably will still see on your drawings (and in your software):

I was very excited to see concentricity and symmetry removed from the ASME Y14.5 2018 standard. These are the only two concepts in our entire GD&T training program where we explain why NOT to use them instead of teaching their benefit. Designers were using these wrong 98% of the time, and no one measured them correctly, so finally, the ASME Standard Committee gave up and just decided to take them away. The problem was that Concentricity and Symmetry mean something different in everyday English than their ASME GD&T counterparts. Most people are unaware of the differences and how this could significantly complicate the measurement of these parts.

That being said, these two symbols are used A LOT at some companies. I would say that 30-40% of the companies we work with have these symbols on their drawings. So, if you are interpreting drawings, you will still need to identify them, understand their tolerance zones, and be able to measure them on prints you receive. Also, thousands of drawings are still in circulation from when these symbols simply meant “centered” or “load-balanced,” and the definition still requires referencing. For those of you who receive your drawings from customers/suppliers or have legacy drawings – you most likely have to interpret these symbols to their 2009 definitions even though you really should just replace them with position or a runout tolerance.

2. The newly added definitions most likely won’t apply to you:

The updates to the standard are great additions for GD&T nerds like myself, who are always looking for new ways to control complex features and parts. When we are consulting with companies, we need to have every tool at our disposal because we are always going to be running into unique situations.

However, for almost every one of you (and the majority of the companies we work with), only 20% of the GD&T standard is ever used on prints. Now, don’t get me wrong; it is a different 20% for each company or industry. For example, injection-molded medical equipment uses a drastically different set of controls than a high RPM automotive component. Besides the removal of concentricity and symmetry, the changes in the ASME Y14.5 2018 GD&T standard are relatively minor.

Do you use profile on complex shapes but need to tighten the form requirement beyond the size envelope to allow the size tolerance to float freely but restrict the shape of the complex feature? For those of you scratching your head wondering what that sentence even means – which is probably most of you – you probably won’t have an application to use the new dynamic profile modifier. Now, I can think of 3-4 of our clients that could greatly benefit from this to better clarify their functional requirements. However, for the vast majority of the other companies we work with – this is a symbol they will most likely never see or need to use.

This also brings up a point about CAD and CMM inspection. Take a look at your CAD or inspection programming software. Even as the years go on, these new symbols will probably remain absent from your software. To this day, we find many Y14.5 1994/2009 advanced requirements missing from some major CMM or CAD programs when we are working with clients. Even in the other direction, I can guarantee that concentricity and symmetry will remain as options for you to select for a least a decade more. So even if you want to switch, your software will take quite a bit of time to catch up.

3. Companies (especially your suppliers) take time to catch up to new standards:

Most design engineers see the new standard come out and immediately think they have to upgrade their standard, similar to upgrading the OS on an iPhone (who am I kidding – engineers use Android phones). Why wouldn’t you want to get all the new tools and symbols that are available right now?

Once again, though I am pleased with the updates, this presents a scary prospect for most companies. Changing standards is not like upgrading software – you don’t just press a button, and it’s done. Since this standard is so integral to engineering drawings, changing it may require many ECR’s, template changes, drawing reviews, updates to inspection plans, and a whole boatload of paperwork. This would cost a lot of money, even for small companies with just a few prints. Also remember, just because you updated your print to the current version doesn’t mean that your supplier/customer/shop floor/lab will know what it means (more on this later).

One big thing so many people don’t realize: You do NOT have to change over to the most recent standard to have a complete use of GD&T at your company. You can use the standard you are on for as long as you like. They were complete standards back when they were released, and that holds true today.

To give you some perspective, of the few hundred companies we consult with, only about 4-5% of them are using the new standard. The ones that are, are usually only doing so because they are just beginning to use Geometric Dimensioning and Tolerancing on their prints and have a fresh start. As of today, we have more clients on the 1982 ANSI standard than on this new standard, and a good 30% of our users are still on the 1994 version. Even some of our industry-leading OEM clients have just made the switch to 2009 and are not anticipating changing to 2018 for another 7-8 years. So, you can be patient for now, as the engineering world tends to move slow when it comes to changing what is tried and true.

Update: Alex Krulikowski (who some consider the godfather of GD&T) did a survey on the usage of GD&T Standards with 180 US companies across 20 different industries using the US GD&T Standards. When asked what standard respondents were using, the results were quite clear:

Of course, this will shift over the next few years. But as you can see, it will take a while before the 2018 usage even catches up to the use of the 1994 standard!

4. Certification is still probably years away:

The ASME standards committee does a great job getting this standard updated and released every decade or so. There is a lot of work that goes into it, and rightfully so. After all, the ASME Y14.5 is trying to standardize communication on any mechanical print across any possible application for any industry. Whether it be electronics, aerospace, BioMed, automotive, or any other manufactured product, the standard must be applicable.

That being said, when I got my first ASME Senior Level certification in 2015, the only test that I could take was for the 1994 edition of the standard. The 2009 standard had been out for 6 years, but the only way I could prove my knowledge in GD&T was on the version of the standard that was created when Ace of Base was topping the music charts. Since then, I have received my 2009 certification, but that was almost a decade after the standard itself was released. This may be a minor point for most of you, but it still can affect some people who are making a career out of being experts with engineering drawings. Drawing checkers, Senior Designers, and Engineering Drawing Consultants like myself will likely not have a chance to prove their knowledge for at least a few years. Now, I don’t know when the 2018 certification test will come out, and maybe it will be sooner rather than later. However, my guess is it will be quite some time before you can add the 2018 GDTP credential to your LinkedIn Page.

5. No matter which version of the standard you are using, the most important concepts have not changed (but are still misunderstood):

I do believe that GD&T is the best way to communicate precisely what is needed for function between design, manufacturing, and inspection. Traditional coordinate dimensioning makes things far too open to interpretation on prints. However, when I mention that I am a realist when it comes to using GD&T, that is because it is still real people, not robots, using GD&T on prints. Trying to put dynamic profile control on a print when your supplier doesn’t even understand how position is controlled is just futile. GD&T is simply the way technical information is communicated on engineering prints. It is far more important that everyone using the drawings understands what is being communicated on the print, than trying to make things “technically perfect”.

Far more people today understand measurement capability, interpretation, and cost benefits of the most common concepts in GD&T than they did when the 2009 standard was released. However, it’s no coincidence that the most useful concepts in the standard are also the ones that people are familiar with. So, before you look to understand all the advanced nuances within the newest 347-page engineering standard, be sure that you (and those you work with) fully comprehend the handful of current time-tested concepts that will be sure to benefit your designs, production, and inspection.

Don’t get me wrong, I will be using the newest standard on my personal designs – the 2018 standard is a great standard and builds nicely off of the 2009 standard. However, I must be an expert and know everything in the standards, as we work with hundreds of different industries and companies. If your company has an advanced use of GD&T and has design, machining, production, quality, and your suppliers are ready to switch, I think it’s a great idea! I just want everyone to understand that for over 95% of the companies out there – the cost of switching standards greatly outweighs the benefits – so make sure it is the right move first.

Tom Geiss is the founder of Engineer Essentials and GD&T Basics – the #1 online resource for GD&T information. He holds the Senior Level ASME GDTP certification for both the 1994 standard and the 2009 standard. He intends to get certified for the 2018 version when it eventually comes out.