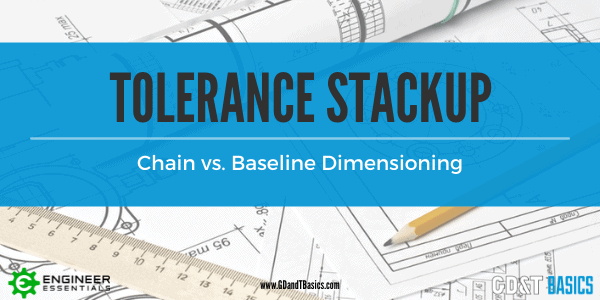 In this question line video, Brandon outlines the pitfalls of Chain Dimensioning and explains how Baseline Dimensioning (or GD&T) can eliminate potentially unwanted tolerance stack.

Chain Dimensioning is when dimensions are drawn from one feature to a second feature, then a third feature is located relative to the second feature. The chain can continue with any number of features, with each one being located in relation to the preceding feature. When using chain dimensioning, the location tolerance of a given feature will be equal to the sum of the location tolerances of preceding features. This is what is known as tolerance stack. Tolerance stack can result in unintentionally large tolerances between features at opposite ends of the chain. Depending on the application, this can result in fitment issues with mating parts.

Baseline dimensioning is one way to prevent excessive tolerance stack. This is where all features are located relative to a single baseline feature, such as the end of the part. Since the position of each feature is independent, tolerances stack is accumulated.

Geometric Dimensioning and Tolerancing can also be used to prevent tolerance stack all together. Each feature can be located with a position tolerance relative to datums, eliminating the possibility of tolerance stack. The GD&T method is more precise than baseline dimensioning because it references perfect tolerance zones from functional datum features, not a baseline feature that could be imperfect.

Interested in learning more about Engineering Prints or GD&T?

Check out our available online courses!