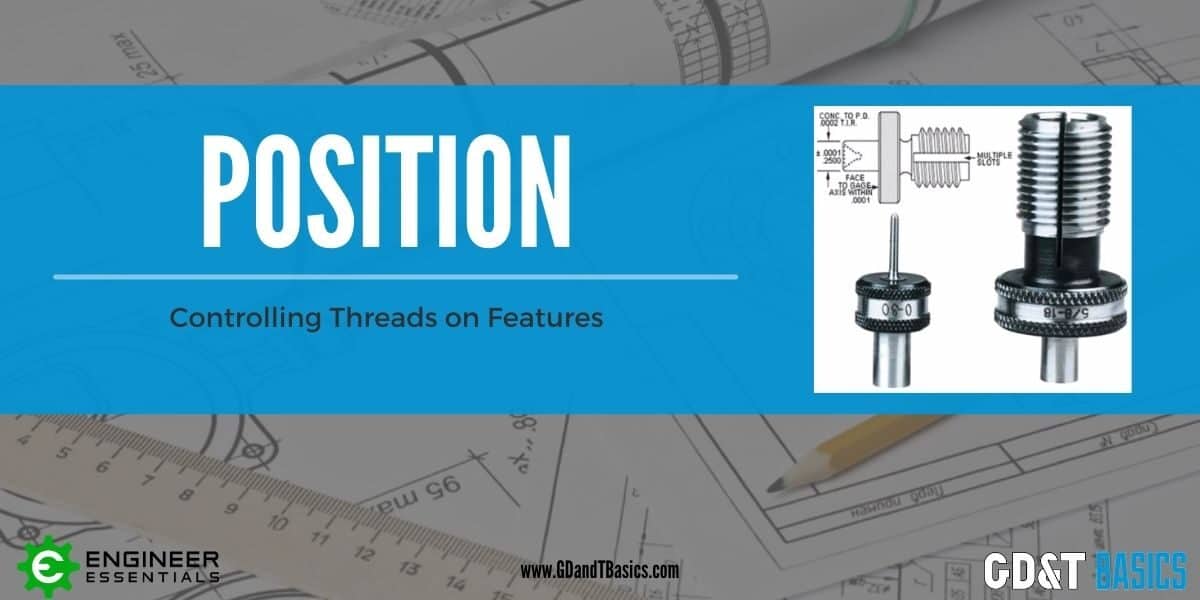 This video is in response to a question that we received on our question line from Tim. Tim’s question is as follows: “We tend to use true position on threaded holes.  Is this valid?  If so, what is the proper way to measure it, and what is it “actually” measuring?  Is it the true position of the Pitch Diam?” To begin answering Tim’s question, we will refer to our GD&T standard.

The ASME Y14.5 Standard, section 2.9 Screw Threads states, “Each tolerance of orientation or position and datum reference specified for a screw thread applies to the axis of the thread derived from the pitch cylinder.  Where an exception to this practice is necessary, the specific feature of the screw thread (such as “MAJOR DIA” or “MINOR DIA”) shall be stated beneath the feature control frame, or beneath or adjacent to the datum feature symbol, as applicable.” To paraphrase the standard, the geometric tolerances and/or datum references apply to the pitch cylinder diameter unless otherwise specified.

The ideal tool for locating threaded holes is a flexible hole location gauge, known as a centerline hole location plug.  These plugs cost somewhere around $100 each and can be purchased in different sizes depending on the thread to be located.  The threads on the plug are slotted and designed to engage the hole threads at the pitch cylinder diameter.  The unthreaded part of the plug features a cylinder of known diameter (often ¼”) coaxial to the thread pitch cylinder.  Each plug will have a diameter and runout tolerance.

To use the centerline hole location plug, it should be threaded partway into the hole.  We recommend that it is not tightened against the part surface to minimize the chance of introducing measurement errors.  The cylinder portion of the plug can then be located with a CMM or other measuring device.  The reference cylinder’s location and orientation will be “identical” to the thread pitch cylinder location and orientation within the centerline hole location plug’s tolerance.

For example, consider a series of threaded holes in a rectangular plate.  Position tolerance is called out in a feature control frame as Ø.016 and referenced relative to three mutually perpendicular datum planes A, B, and C, respectively.  Datum plane A is defined as the plate’s broad surface, and datum planes B and C are plate edge surfaces.  The holes are located by basic dimensions from the datum edges.  The thread callout is 5/8-11 UNC-2B thread.  We can visualize each hole’s tolerance zone as a cylinder with a diameter of Ø.016 inches, having an axis perfectly perpendicular to datum plane A.  We can then use basic dimensions referencing the hole locations to datum planes B and C to define the holes’ true position.  The axis of the tolerance zone is perfectly aligned at the true position.  There is no special note stating that the “MINOR DIA” or “MAJOR DIA” is to be measured in this example.  Per the standard, the pitch cylinder diameter must be used to evaluate the hole location and orientation, using centerline hole location plugs.

We often observe one measurement error using a “best fit” gauge pin to locate threaded holes when this procedure is not called out on the drawing.  A gauge pin that fits snugly into the hole is selected and used to establish the threaded hole’s position and orientation.  However, this procedure engages the thread minor diameter, not the pitch cylinder, and it is only permitted when the note “MINOR DIA” is added below the feature control frame.  Due to the specialized gauges required to locate threads from the pitch cylinder, it is good practice for engineers and designers to use the “MINOR DIA” note for internal threads and the “MAJOR DIA” note for external threads where possible.