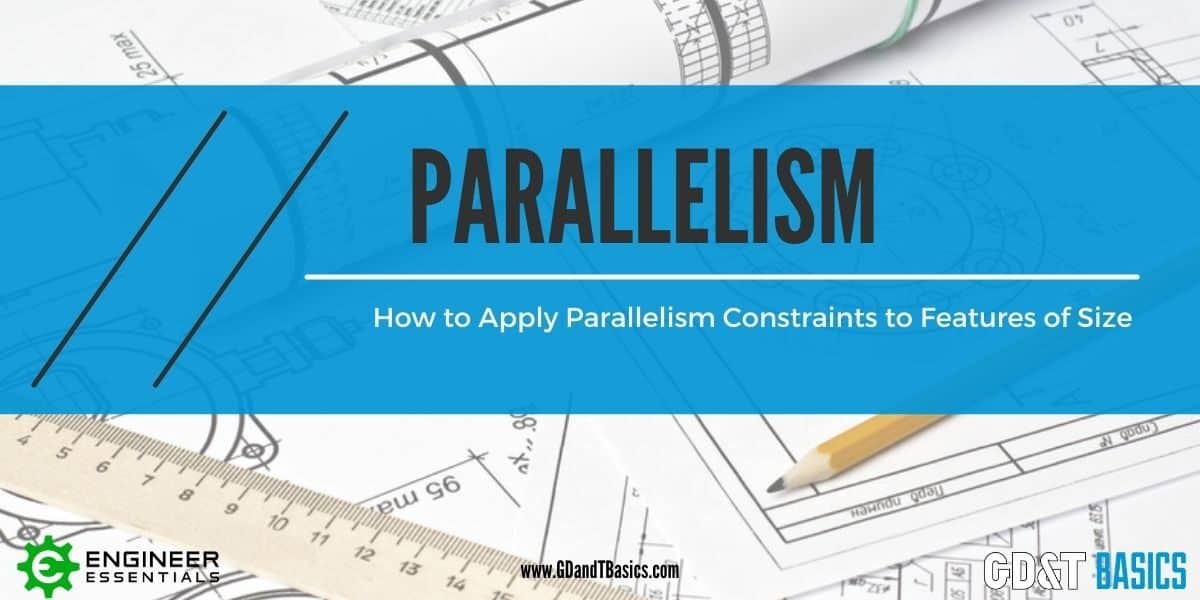 This video is in response to a question that we received on our question line from Jamee.  Jamee’s question is as follows: “For parallelism of a circular feature of size (axis) can you use two surfaces perpendicular to each other (that are both parallel to the feature axis) as datum references within the FCF to make the parallelism axis refers to the axis of intersection?”  The answer to this question is yes, you can use two planar surfaces to define a datum reference frame for an axis, and this is a common practice.  We will explore this concept in more detail with a few examples.

Consider an example of a thick rectangular plate with two holes in it where datum plane A is defined as the broad surface of the plate and datum planes B and C are intersecting plate edge surfaces.  A feature control frame calls for the holes to be parallel within 0.005 to datums B and C, respectively.  We can visualize the orientation tolerance zones as cylinders with a diameter of 0.005, centered on each hole’s ideal axis.  The order of the datum references in the feature control frame is important, and the constraints should be applied in that order.  The part will also be inspected by establishing datum references in the same order.  Since B is the primary datum, or the first datum referenced, the cylindrical tolerance zone axis is constrained to be oriented parallel first to datum B.  This means that the axis cannot be tilted or rotated toward or away from plane B, but it can still be rotated within a plane parallel to B.  Next, the axis of the cylindrical tolerance zone is constrained to be parallel to datum plane C.  Since datum plane C is also perpendicular to datum plane B, this removes the remaining freedom of rotation of the axis and fully constrains the orientation.   At this point, we have demonstrated that the approach outlined in Jamiee’s question properly applies parallelism constraints for features of size.

Note that we could achieve the same result for our orientation using a perpendicularity orientation tolerance with reference to datum plane A.  Also, notice that the example needs dimensions to tell us where the hole axes are to be located.  The dimensions to locate the holes should be drawn from the datum reference planes.  Another way to call out these holes would be to use a position tolerance. However, this would require the use of basic dimensions. Position would simultaneously control location and orientation.

Finally, consider an inspection of our example part with locating (coordinate) dimensions. Dimensions that do not relate back to the datum reference frame with GD&T callouts would not be inspected relative to datums.  For example, a dimension for our example plate’s length or width would be inspected by taking a two-point measurement or “caliper measurement” on the actual part surfaces.  This is done to measure the actual physical part dimensions, not from the datum plane that describes the ideal part surface.

Overwhelmed by the Complexity of GD&T Training?