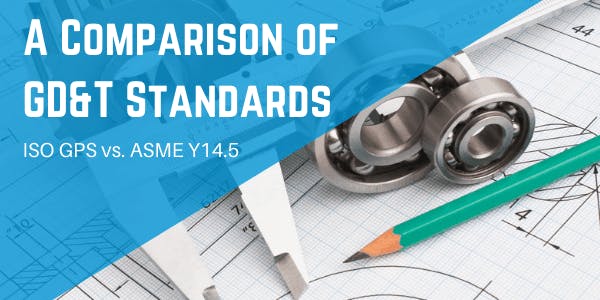 A Comparison of GD&T Standards: ISO GPS vs. ASME Y14.5

What is the difference between the ISO and ASME GD&T standards? Read on to find the answers to these questions and more – and see our GD&T Standards Comparison Chart available to download for free below.

There are many standards that define requirements for GD&T. The two most popular are published by ASME (American Society of Mechanical Engineers) and ISO (International Organization for Standardization). These two systems have many similarities and a few major differences. In this article, we are going to discuss the ISO Geometrical Product Specifications (GPS) family of standards and their differences from the ASME GD&T standards.

ISO geometrical product specifications (GPS) are created and maintained by the ISO Technical Committee 213 (ISO/TC 213). This committee was formed in 1996 under the leadership of Danish Standards, the national organization of standards in Denmark.

The ISO GPS family of standards cover the requirements for:

ISO GPS is the international dimensioning and tolerancing standard. Having a global specification where the requirements are shown using symbols, rather than notes, has a major benefit. It allows a drawing of a part to be created in one country and manufactured in another without confusion. Yet, a majority of American companies and many international companies use the ASME GD&T standard, ASME Y14.5, as their GD&T standard, rather than ISO standards.

In fact, a recent survey by Alex Krulikowski showed that ASME Y14.5 may be used more often than ISO GD&T standards. One hundred and thirty-three people from varying industries, company sizes, and 27 countries responded to the survey. Sixty-three of the participants were from the US, and 70 were from other countries. The results of this survey showed that 86% of US participants used ASME Y14.5 in their company. Fifty-six percent of international participants indicated that their company uses ASME Y14.5.

What are the major differences between the ISO GPS standards and ASME Y14.5?

ASME Y14.5 is a specification for the dimensions and tolerances on a drawing of a part only. It does not include specifications for verifying the dimensions of the manufactured part. This is addressed in a separate document, ASME Y14.43. ASME Y14.43 gives dimensioning and tolerancing principles for gages and fixtures used to verify the manufactured parts. This gage creation document includes many figures showing parts and their corresponding gages. This helps clarify how the gage tolerances ensure that the parts are made to spec.

In addition to dimensioning and tolerancing, ISO GPS standards also include many specifications for the design of different types of gages, acceptance tests, and calibration of coordinate measurement systems. ISO 14978 defines the general requirements and calibration requirements for GPS measurement equipment (such as micrometers, calipers, and gauge blocks). ISO 14253 (this standard is broken up into six parts) deals with verifying conformity or non-conformity of a part being inspected using the measurement equipment.

Because of these differences, the ASME standards are often seen as having a preference for hard gaging. (Some examples of hard gages are pin, ring, and thread gages.) ISO standards are seen to be more favorable to inspection procedures using coordinate measurement machines and systems.

There is a fundamental difference in the way that the ISO and ASME GD&T standards look at a single feature on a drawing.

One of the fundamental rules of GPS stated in ISO 8015 is the “Independency Principle.” The independency principle states that each dimensional or geometric tolerance on a drawing is met independently, unless a relationship is specified on the drawing.

In contrast, ASME Y14.5 focuses on a relationship between size and form. The guiding principle is called the “Taylor Principle” or “Envelope Principle.” This principle indicates that the size tolerance limits of a part control the maximum variation of the form of a part.

For example:
A bushing has a diameter tolerance of +/-.04. Per the envelope principle of ASME Y14.5, you would also be getting a cylindricity (straightness & circularity) control of .08 without having to use any additional symbols. (Though, using a GD&T symbol for cylindricity would allow for looser diameter tolerances while maintaining requirements for straightness and circularity.)

To get a grasp on geometrical dimensioning and tolerancing with the ISO GPS system, start with these three standards:

The first thing you will notice when comparing ASME and ISO GD&T standards is the difference in the number of documents. ASME’s Geometric Dimensioning and Tolerancing standards are located within their ASME Y14 series, which includes 17 standards. The standard referenced for dimensioning and tolerancing parts for production is ASME Y14.5. ASME Y14.5 has been reviewed/revised on an average of every ten years. The latest revision of ASME Y14.5 was published in 2019 and is 344 pages long. (This new edition of ASME Y14.5 updated many of the figures to 3-D model views to account for the industry transition away from 2-D drawing views to 3-D models.)

The ISO GPS family of standards includes over 100 standards. Rather than having one standard that covers all geometrical dimensioning and tolerancing, there are many ISO standards, each with a narrow focus. This makes each document shorter, which also makes it easier and quicker to update and revise.

ASME Y14.5 covers theory and part dimensioning practices in one document. As the ISO GPS standards are located in several documents, many more would need to be purchased depending on what you are designing.

You can see from Table 2, that if you had to purchase the above four ISO standards, they would cost more than ASME Y14.5. Depending on what you are designing, you would also need to purchase other ISO specifications.

ASME has several GD&T courses available, with a cost of up to $2,000 per course, per student.

If you are interested in learning more about Geometric Dimensioning and Tolerancing and how ASME Y14.5 is applied in the real world, not just in theory, check out the GD&T Basics Fundamentals course.
In this course, all of the complex GD&T topics are broken down in a way that is easy to understand, and you are able to learn at your own pace. You will gain a solid foundation of GD&T knowledge, improve your technical skillset and engineering drawing abilities, and make an instant impact on your work!

A Comparison of GD&T Standards: ISO GPS vs. ASME Y14.5