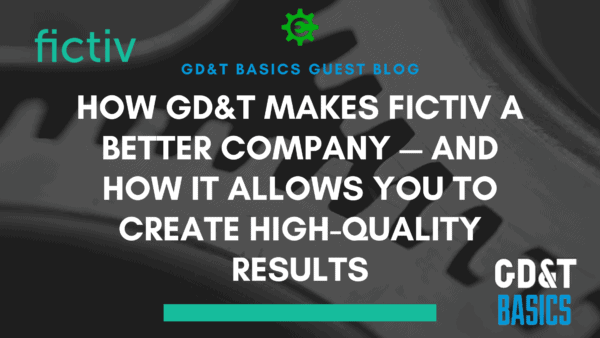 Geometric dimensioning and tolerancing (GD&T) is a system in manufacturing that can be traced back to the 1940s. It was developed by Stanley Parker while he worked at Royal Torpedo Factory in Alexandria, West Dunbartonshire, Scotland. In short, GD&T allows the drafter to accurately dimension a part and make sure it fits into its intended assembly without interference or excessive wear. The system is a critical part of CNC machining and is essential at Fictiv to produce quality tools and products during the manufacturing process.

What Is the Purpose of GD&T?

Geometric dimensioning refers to the size of a part whereas tolerances are the acceptable limits for how much a part can vary from its specs. Together, geometric dimensioning and tolerancing is a set of specifications that help ensure total dimensional accuracy. It also makes sure that the measurements of an object can be referenced later during manufacturing and quality control.

These specifications allow manufacturers to ensure all measurements are accurate and correctly line up without going out of tolerance. GD&T can be applied at every stage in the manufacturing process, and it’s an integral step for CNC machining companies like Fictiv, which use GD&T to make sure products and parts measure up correctly without going out of tolerance from the beginning to the end of the manufacturing process.

The purpose of GD&T—as defined by the ASME Y14.5 2009 standard—is to describe the engineering intent of parts and assemblies. The datum reference frame can describe how the part fits or functions in its respective assembly environment.

With GD&T specifications, there are far fewer issues during the inspection process, thus far fewer issues on the assembly line. There is also less rework needed and less scrap material wasted due to the lower chances of a part being out of proper specs. This ultimately means more money saved over time while producing higher quality parts.

How Is GD&T Implemented?

GD&T enables machine shops of all types to understand a design’s functional configuration and produce it to specification with injection molding, additive manufacturing, or CNC machining. The process gives each company greater control over how products are made. It speeds up production and helps ensure there are no problems with quality that might arise from human error, such as inaccurate planning.

So how might this system be utilized in your shop?

Geometric dimensioning and tolerancing should ideally be utilized any time you need a part to function in a specific manner in its assembly environment. As opposed to common thought, GD&T isn’t used only when there is a need for tight tolerances. While many believe that to be the case, it simply isn’t true.

GD&T should be utilized when:

When utilizing GD&T, you have a communication tool that helps eliminate any confusion or misinterpretation of design intent and part interrelationships. It can be used by the machinist to create toolpaths that account for specifications such as location, orientation, or overall shape. The tools that are needed, and even feed rates, can be dictated by the process to achieve the best results possible with a given material type. The end product will then be precisely what the designer intended.

Geometric Dimensioning and Tolerancing Is Useful Across All Manufacturing Processes

GD&T provides standardized methods of specifying the dimensions and overall design intent of an object that can be referenced during manufacturing or inspection. These specifications allow manufacturers to ensure that all measurements are accurate, reliable, and repeatable so there won’t be any mismatches in the final product.

When GD&T is used as intended, it should help prevent errors from occurring during manufacturing and inspection, and thus on the assembly line. When parts are made with GD&T tools during production, machine shops end up with much less waste and fewer replacements due to mismeasurement, wear, and tear.

By using geometric dimensioning and tolerancing in conjunction with other inspection methods, machinists can be sure their final product won’t need additional work to fix errors or mismatches. In general, when there are no issues during inspection, they won’t pop up on the assembly line, either.

Many businesses that work with CAD software, including Fictiv, already use geometric dimensioning and tolerancing to improve accuracy and repeatability while also speeding up production times.

It also aids in producing better-end products for clients. This is because GD&T allows for the design of parts to be checked against a set of rules. This system of checks helps reduce errors since all dimensions can be verified and corrected before and during the manufacturing process rather than after production is underway.

Further, geometric dimensioning and tolerancing improves accuracy by eliminating measurement variability in geometry due to errors in human or machine input. This means that when designing with GD&T, manufacturers will see fewer dimension variations as the CAD program measures out the features on each part. In addition, GD&T ensures highly accurate repeatability during the manufacturing process since all dimensions within the program stay true through each phase of manufacturing.

More than improving accuracy, however, GD&T is first and foremost a way to ensure that parts will function as intended and that features properly relate to each other as well as to the datum reference frame (DRF). It is a more sophisticated and tolerant system when compared to coordinate dimensioning, while preventing unwanted system-level effects such as stacked tolerances, load-bearing strength, and overall weight. This makes it the most attractive system to adopt for any manufacturing company.

GD&T is a critical tool for CNC machining for companies that want to produce high-quality parts rapidly and accurately. Without it, there is always a risk that manufacturers are working with parts and pieces that might not match up depending on the supplier or manufacturer.

Accuracy issues are a huge waste of time and money. When items are mismeasured the entire product line from design to assembly might need to be scrapped and started over. Utilizing GD&T along with CAD software helps ensure accuracy in every piece from start to finish.

Inaccurate planning results in production delays and increased costs on a project. This is where geometric dimensioning and tolerancing shines. GD&T helps control both quality issues and supply concerns by making sure that parts are dimensioned consistently when using CNC machining and other techniques to produce a part or product.

By using tools designed with dimensional accuracy, manufacturers can better plan production capacity and work around supply shortages or any other issues that would arise due to inaccuracy in the production process.

The benefits of GD&T for CNC machining are vast. Here is a shortlist of the ways you can benefit from using this system:

GD&T also allows designers to use precise engineering principles, which is another benefit that helps minimize expensive rework. If designers working in the “fuzzy front end” of development are already stimulated to think about how best to produce their concepts, it streamlines the translation to engineering and subsequent manufacturing phases.

When issues can be caught on the drawing board instead of the machine shop floor, it greatly helps companies avoid costly rework, redesign, lost time, and delayed production.

Geometrical tolerance analysis can further be used as an extension of reliability for complex parts. It facilitates integration into MRP systems so that production capacity can be planned in advance without risking supply shortages or quality problems due to inaccurate planning, mistakes, and required rework later down the line. Finally, it’s beneficial to use GD&T thanks to the largely automated process, further increasing overall efficiency and output.

Christine Evans is Head of Marketing at Fictiv, an on-demand manufacturing company. Over the past six years, Christine has grown Fictiv’s popular Digital Manufacturing Resource Center, with over 2,000 teardowns, DFM guides, and mechanical design articles to help democratize access to manufacturing and hardware design knowledge.