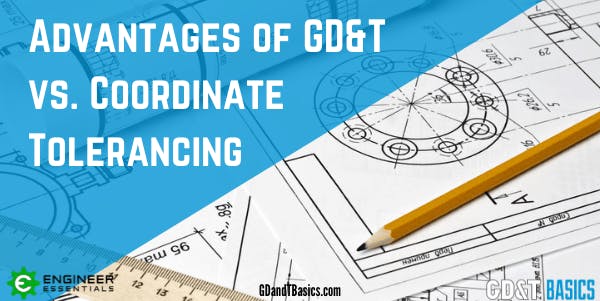 Advantages of GD&T vs. Coordinate Tolerancing

Everyone understands the simple plus or minus tolerances of coordinate dimensioning. So why use GD&T instead? Here are four reasons that GD&T has an advantage over coordinate tolerancing…

What are the advantages of GD&T vs. Coordinate Tolerancing?

Coordinate dimensioning is easy to read and understand. It’s the way most of us have learned to create drawings and is what we are familiar with. So, why make a change? Why would we not want to use simple plus or minus tolerances to locate features on a drawing? When should we use GD&T instead? In this article, we are going to discuss four benefits to design and manufacturing by applying GD&T in drawings rather than using coordinate tolerancing. The first three points of this article are also discussed in this video: Using True Position vs. Coordinate Dimensions.

When it comes to the inspection of a part, GD&T has a great advantage over coordinate tolerancing. With coordinate tolerancing, dimensions of the part are given, but the drawing does not indicate how the part is to be set up for measurement. This can result in very different measurement values for the same part. Take the part drawing in Figure 1 as an example. The coordinate dimensions give the location of two holes. Based on the drawing, how would these holes be measured?

The location of these holes could be measured in multiple ways because it is not specified on the drawing. Figure 2 shows two ways this part could be set up for inspection.

You can see that the ends of the manufactured part are not perpendicular to the long edge of the part. Because of this, the measurement location of the holes in setup 1 would result in different values than what would be measured using setup 2.

So how does GD&T solve this issue? The answer – datums. A datum is a theoretical plane, axis or point that are used to establish a datum reference frame that dimensional tolerances are referenced to. It is called out on a drawing as a capital letter with a box around it. Datums on a drawing show how the part is to be setup for measurement.

Let’s look at another example. Figure 3 shows a drawing of a part with four holes, using coordinate dimensions. The measurement setup is not specified on the drawing, and based on what we learned above, different setups could provide different measurement values for the location of the holes. 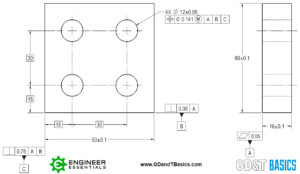 By securing your part to the datums using a datum feature simulator, you are specifying how you want the part to be measured to mimic the actual function of the part. This results in repeatable measurements. In addition to this, you have the ability to inspect the part right on the line by using functional gauging. This can be done when the drawing calls out MMC (Maximum Material Condition) along with Position. We will talk more about using MMC later in our discussion of Bonus Tolerances.

When GD&T is used in a design, the focus is on the function of the part. In the four holed part example given earlier, the goal of the four holes is to attach the part to an assembly using bolts. This is shown below in Figure 6. So, the goal when dimensioning the position of the holes would be to make sure the centers of the holes are not too far away from their targets. 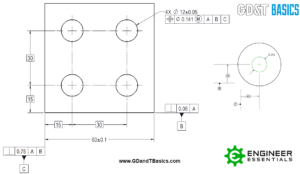 A mirror is another great example of how GD&T has the advantage when designing for function. Let’s say that the entire surface of a mirror needs to be flat within 0.2mm to avoid a wavy surface. Without GD&T, you could try to avoid a wavy surface by adding a tight thickness tolerance. However, the thickness could be measured in several places, with each point passing inspection and still have a wavy surface. With GD&T, you can show the intent of the design – a flat surface – by using the flatness symbol, as shown in Figure 9.

We demonstrated earlier that by using GD&T, we can create a round position tolerance zone for the centers of the holes that is functionally the same as the square tolerance zone produced using coordinate dimensions. How does having a round tolerance zone benefit manufacturing?

To do this, we first need to determine the distance from point to point across the center of the square tolerance zone. This will be our circle’s diameter. You find this using the Pythagorean theorem (a^2+b^2=c^2). This results in a diameter of 0.141. We can then use this diameter to solve for the circular area, resulting in a value of 0.0156.

When we compare the tolerance area of the square and round zones, we see that the round tolerance zone is 56% larger. Having a larger positional tolerance zone means that there are additional points where the center of the hole in the manufactured part could land and still be within the drawing specification. This results in a part that is easier and cheaper to produce!

In addition to GD&T allowing for a larger tolerance area, you also get a “bonus tolerance” when a feature is designed for maximum material condition (MMC). Maximum material condition exists when a feature contains the largest amount of material allowed by its size tolerance. A pin would be at MMC when it is at its largest allowable size. A hole is at MMC when it is at its smallest allowable size.

When you are designing mating features, not only do you need to take into account the MMC, but you also need to consider the position tolerance. You do this by calculating the Virtual Condition (VC). Virtual Condition is the worst-case condition that will still allow the mating part to fit. It is the combination of the MMC size and the stated position tolerance at MMC that will allow the parts to assemble.

For an external feature, the virtual condition is controlling the outer boundary. The virtual condition is found by taking the pin size at MMC (largest size) and adding the position tolerance to that. The hole that this pin would need to fit into must be larger than the VC of the pin. Figure 13 shows the same type of part as Figure 11, except it has an external feature (pin) rather than an internal feature (hole).  In this case, as the pin size decreases (becomes smaller than MMC), the pin gains a bonus positional tolerance, as shown in Figure 13.

For a more detailed explanation of Bonus Tolerance, check out our video on Maximum Material Condition.

We have covered four advantages of GD&T vs. Coordinate Tolerancing in this article. If you are looking to learn more about Geometric Dimensioning and Tolerancing, and how it is applied in the real world, check out the GD&T Basics Fundamentals course.

In this Fundamentals course, we don’t throw every concept at you – just the topics that are practical for real work with engineering drawings, making this the most practical and productive GD&T course you will find!

If you are interested in learning more about GD&T?