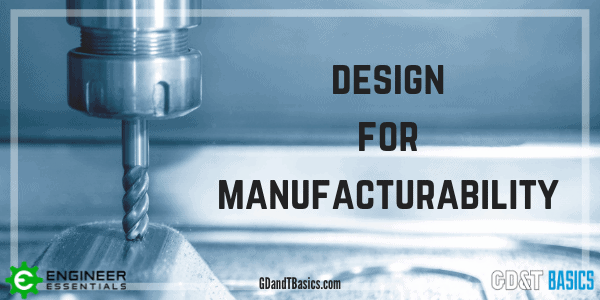 How do you create a quality design, but at the same time, keep cost and ease of production in mind? In this article we will examine three key areas in designing for manufacturability and give you several tips to get started.

What is “Design for Manufacturability?”

Who should be involved in designing for manufacturability?

When designing a part for manufacturability, everyone who has a stake in the product should be involved. This includes more than the design and manufacturing engineers. Some other departments involved with the product include Quality (inspection), Purchasing (material procurement), and even Marketing. The vendors from which you would be buying materials and components should also be consulted. Having all stake-holders involved during the design process will help potential problem areas come to light earlier in the process. This allows those issues to be resolved during the design phase.

What influences manufacturability and cost for a part?

There are many things to take into consideration when creating a new design. As was mentioned above, the more stake-holders involved during the design phase, the more potential issues will come to light and be resolved early on. This in itself is a huge cost savings when considering the “Rule of 10.”

The Rule of 10 is the idea that at each new phase of product development, the cost to make a change is 10 times what the cost would have been to change the product in the prior phase. Say that the product development timeline consists of design, testing, then production. By the Rule of 10, making a change during the testing phase would cost 10 times the amount of making that change in the design phase. And if that change wasn’t made until production, it could cost 100 times the amount of making the change during the design phase. This clearly shows the importance of having a team that is knowledgeable in all aspects of the design.

So, what are the key considerations when designing for manufacturability?

Key Considerations in Design for Manufacturability

When designing a part to be easily manufactured, optimal materials, part tolerances, and manufacturing processes must be determined.

Use common parts: If you can’t use an off-the-shelf part, is there a part currently being used on other assemblies that will fit your function? Using common parts not only prevents you from having to create a new design, but it also reduces the number of parts that must be kept in inventory.

Material considerations: Another consideration is the material that the part is to be created from. Try to use common materials, which are easier to procure. Also, select materials that your existing manufacturing equipment can handle.

2. Design for Ease of Assembly

Optimal tolerances: To ensure the proper fit of a part within the assembly, the part needs to have optimal tolerances specified on the drawing. Drawings incorporating Geometric Dimensioning and Tolerancing (GD&T) do just that. When GD&T is used in a design, the focus is on the function of the part, and tolerances are determined based off of the functional requirements.

Take the assembly shown in Figure 1 as an example. In this assembly, a part is designed with four holes. The purpose of the four holes is to attach the part to an assembly using bolts. The goal when dimensioning the position of the holes would be to make sure the centers of the holes are not too far away from their targets.

With GD&T, a round tolerance zone for the position of the hole would be shown by using the position symbol and diameter symbol in the feature control frame. Figure 3 shows this same part dimensioned using GD&T. Having a round positional tolerance zone, rather than a square one, results in a tolerance zone that is 56% larger, yet still meets the functional requirements. Having a larger tolerance results in a part that is easier and cheaper to produce. This concept is explained more in-depth in this article: Advantages of GD&T vs. Coordinate Tolerancing.

In addition to tolerances, when designing a part that will be assembled into another product, consider ways to make the assembly as straightforward and uncomplicated as possible.

Tips for the assembly design:

The third consideration when designing for manufacturability is to design for inspection.

Designing using GD&T allows us to indicate what is functionally important, how to establish the inspection set-up, and gives the ability to use functional gauges in the inspection of the part.

When a design is created using GD&T, the drawings clearly show what is functionally important. This drawing of a mirror is a great example of this. Let’s say that the entire surface of a mirror must be flat within 0.2mm to avoid a wavy surface. Using coordinate dimensions, you could try to achieve a flat surface by adding a tight thickness tolerance. However, the thickness could be uniform and the mirror be shaped like a potato chip! With GD&T, you can show the intent of the design, which is a flat surface, by using the flatness symbol. This is shown in Figure 4.

Indicate inspection setup on drawing: When using GD&T in your design, not only are the part dimensions shown, but the drawing also indicates how the part is to be set up for measurement. This is done by including datums on the drawing. A datum is a theoretical plane, axis or point location that dimensional tolerances are referenced to. It is called out on a drawing as a capital letter with a box around it. An example of a drawing using datums is shown in Figure 5.

Design for use of functional gauges:

The third consideration when designing for inspection is to design for ease and quickness of inspection. This can be accomplished using functional gauges. Functional gauges allow the part to be inspected right on the line, decreasing the inspection time.

Three areas must be considered when creating a design:

By doing this, you can create a quality product at a lower cost that is easier to produce and inspect.

Overwhelmed by the Complexity of Engineering Drawings?

Learn at your own pace and apply it with confidence in the real world.