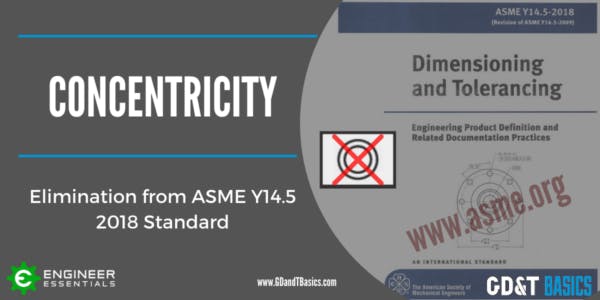 The ASME Y14.5 Standard was last updated in 2018, and one of the substantial changes was the elimination of the concentricity GD&T control.  Previous versions of the standard recommend using runout or position controls instead of concentricity when possible, so the 2018 elimination is not entirely surprising.

The 2009 version of the Y14.5 GD&T standard defines concentricity as “the condition where the median points of all diametrically opposed elements of a surface of revolution (or the median points of correspondingly located elements of two or more radially disposed features) are congruent with a datum axis (or center point).”  It further recommends using concentricity tolerance only where “the relationship between the derived median points of the controlled feature and the datum axis is a primary design concern, or where the coaxial control of noncircular features is a design requirement.”  This complicated definition and application criteria along with the confusion that they create are the main reasons that the constraint has been removed from the latest standard.  Note that ASME’s definition of concentricity is very different from the common English definition according to Meriam-Webster: “concentric: (1) having a common center (2) having a common axis.”

To further understand ASME’s reasoning, we searched the 2018 Y14.5 text for mention of the word “concentricity.”  This yielded five results, the first of which is in the Foreword section of the standard.  This passage reads “However, two past practices, use of concentricity and use of symmetry symbols, are no longer supported.  Both have been eliminated because other characteristics provide more direct control of features and establish requirements that have a well-defined meaning.  Deletion of the symbols does not leave the industry without a means to control coaxial or symmetrical features, but it does eliminate the confusion that surrounds the symbols and their misapplication.“  Note, the words “eliminated” and “deletion” here indicate that concentricity is no longer a “not preferred” constraint, but a forbidden one.  ASME also makes two other salient points: Other GD&T controls can be used instead, and concentricity was frequently misused.  Also, note that symmetry has been eliminated from the 2018 ASME standard.

The 2nd and 3rd instances of the word “concentricity” in the 2018 Y14.5 standard are found in the section entitled “NONMANDATORY APPENDIX A PRINCIPAL CHANGES AND IMPROVEMENTS,” and they state that the definition and symbol for concentricity have been deleted from the standard.

The final two places that concentricity is mentioned in the 2018 standard are in the “NONMANDATORY APPENDIX D FORMER PRACTICES” section.  Each of these simply reviews the content that was deleted.

Finally, even though concentricity has been eliminated in the 2018 ASME Standard, very few companies have adopted the 2018 standard, and many are just now transitioning to the 2009 version.  Unless a drawing title block references the 2018 ASME Y14.5 standard, concentricity can be used.  However, we continue to recommend using position, runout, or total runout instead, where possible.