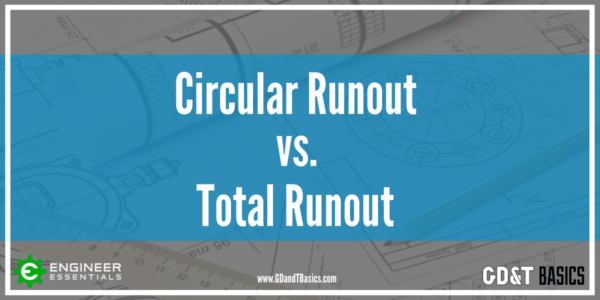 In this question line video, Brandon reviews the differences between the GD&T callouts for circularity, circular runout, and total runout.

To examine the differences in these concepts it is helpful to first review the GD&T hierarchy of SLOF – Size, Location, Orientation, and Form. When defining a feature, begin by specifying the size of a feature. Location is defined next, then orientation, and finally form.

Circularity is a 2D callout that controls only form. It cannot be referenced to a datum axis. Because it will only control form (how round the feature is), for control of cylindrical features we should choose a callout that will also provide control of location and orientation. This is why circularity is mostly used as a refinement. Additionally, note that the two dimensional aspect of circularity means that each cross section of the part is inspected independently, with no comparison between different cross sections.

The Circular Runout callout (commonly referred to as runout) controls location, orientation, and (usually) form in two dimensions. One exception is when the size tolerance is more strict than the runout tolerance. In that case, the size tolerance controls the form of the feature. Unlike circularity, circular runout requires us to specify a datum axis that the part will be rotated about. This is also a 2D callout and each cross section of the part is inspected independently, with no comparison between different cross sections. Circular runout measures the variation of the surface elements when rotated the full angular extent of the feature around the datum axis. This is most commonly measured with a fixed dial indicator. If we travel along the datum axis to a different point of measure, the indicator must be re-zeroed so that one cross section is not compared to another.